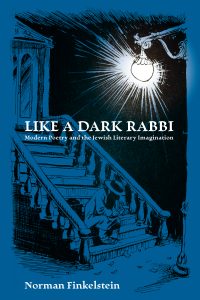 Like a Dark Rabbi: Modern Poetry and the Jewish Literary Imagination Norman Finkelstein

Like a Dark Rabbi: Modern Poetry and the Jewish Literary Imagination Norman Finkelstein

Wallace Stevens’ “dark rabbi,” from his poem “Le Monocle de Mon Oncle,” provides a title for this collection of essays on the “lordly study” of modern Jewish poetry in English. Including chapters on such poets as Charles Reznikoff, Allen Grossman, Chana Bloch, and Michael Heller, this volume explores  the tensions between religious and secular worldviews in recent Jewish poetry, the often conflicted linguistic and cultural matrix from which this poetry arises, and the complicated ways in which Jewish tradition shapes the sensibilities of not only Jewish, but also non-Jewish, poets.

Finkelstein, described as “one of American poetry’s indispensible makers” (Lawrence Joseph), whose previous critical work has been called “the exemplary study of the religious aspect of the works of contemporary American poets” (Peter O’Leary), considers large literary and cultural trends while never losing sight of the particular formal powers of individual poems. In Like a Dark Rabbi, he offers a passionate argument for the importance of Jewish-American poetry to modern Jewish culture, and to American poetry more broadly, as it engages with the contradictions of contemporary life.

Joe Safdie reviews Like a Dark Rabbi.
In Dispatches from the Poetry Wars, 1/17/2020
For full review visit: https://www.dispatchespoetrywars.com/about/

“In some ways, I’m the least likely person to review Like A Dark Rabbi, a collection of essays on the Jewish literary imagination in modern poetry by Norman Finkelstein, because although I was born Jewish, and will thus always be a Jew ( or so Bret Stephens and a recent Trump executive order affirm), I’m not an observer or even a believer. As it turns out, though, that’s not unusual: if there’s a word that recurs throughout these different essays in different ways – remembering that it’s a collection written and reworked over years, without a comprehensive argument – that word would be “secular,” and a major task of the essays is to trace how a secular culture and attitude can still be steeped in Jewish tradition, history and texts.”

“Dark Rabbi’s richness is the way it contains this multi-dimensional, contradictory, sacred and profane, but always throbbingly alive poetics. It might be likened to a mysterious broad river never content to flow in just one coherent direction…In his scholarly wanderings, Finkelstein has constructed an exemplary crooked bridge across which Jewish culture and Jewish life merge.”

“The phrase “Like a Dark Rabbi,” from the Pennsylvania Dutch-bred modernist Wallace Stevens’s “Le Monocle de Mon Oncle” (1918), by itself indicates Finkelstein’s open mind about who can write a Jewish poem.”