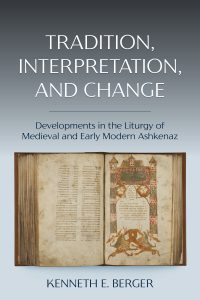 Tradition, Interpretation, and Change:
Developments in the Liturgy of Medieval and Early Modern Ashkenaz

Minhag (custom) played a far greater and far more important role in medieval Ashkenazic society than in any other Jewish community. In upholding the authority of a custom, halakhic authorities frequently asserted that “custom prevails over halakhah.” Furthermore, Ashkenazic authorities asserted that Ashkenazic custom is more authentic than the customs of other Jewish communities, including those of Sepharad (Spain).

Given the importance attributed to minhag and the influence of the siddur commentaries of the circle of Ḥassidei Ashkenaz, which emphasize the precise formulation of liturgical texts, one might assume that Ashkenazic Jewry was committed to preserving ancestral custom and opposed to liturgical change. However, the reality is that the liturgy of Ashkenaz was never static. From a very early time, new liturgies and liturgical practices were incorporated into the service, the inclusion of various prayers was challenged, and variant readings of prayers became standard.

Tradition, Interpretation, and Change focuses on developments in the Ashkenazic rite, the liturgical rite of most of central and eastern European Jewry, from the eleventh century through the seventeenth. Kenneth Berger argues that how a prayer or practice was understood, or the rationale for its recitation or performance, often had a profound effect on whether and when it was to be recited, as well as on the specific wording of the prayer. In some cases, the formulation of new interpretations served a conservative function, as when rabbinic authorities sought to find new, alternative explanations which would justify the continued performance of practices whose original rationale no longer applied. In other cases, new understandings of a liturgical practice led to changes in that practice, and even to the development of new liturgies expressive of those interpretations.

While emphasizing the role that the interpretation ascribed to various prayers and practices had in shaping the liturgy of medieval and early modern Ashkenaz, Berger illustrates the degree to which Sephardic and kabbalistic influences, concern for the fate of the dead, the fear of demons, and the desire for healing and divine protection from a variety of dangers shaped both liturgical practice and the way in which those practices were understood.