x
by Justin Sovine
on June 15, 2020
under Forthcoming, News
∞ Permalink 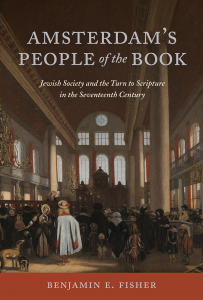 The Spanish and Portuguese Jews of seventeenth-century Amsterdam cultivated a remarkable culture centered on the Bible. School children studied the Bible systematically, while rabbinic literature was pushed to levels reached by few students; adults met in confraternities to study Scripture; and families listened to Scripture-based sermons in synagogue, and to help pass the long, cold winter nights of northwest Europe. The community’s rabbis produced creative, and often unprecedented scholarship on the Jewish Bible as well as the New Testament Amsterdam’s People of the Book shows that this unique, Bible-centered culture resulted from the confluence of the Jewish community’s Catholic and converso past with the Protestant world in which they came to live. Studying Amsterdam’s Jews offers an early window into the prioritization of the Bible over rabbinic literature — a trend that continues through modernity in western Europe. It allows us to see how Amsterdam’s rabbis experimented with new historical methods for understanding the Bible, and how they grappled with doubts about the authority and truth of the Bible that were growing in the world around them. Amsterdam’s People of the Book allows us to appreciate how Benedict Spinoza’s ideas were in fact shaped by the approaches to reading the Bible in the community where he was born, raised, and educated. After all, as Spinoza himself remarked, before becoming Amsterdam’s most famous heretic and one of Europe’s leading philosophers and biblical critics, he was “steeped in the common beliefs about the Bible from childhood on.”