x
by Justin Sovine
on December 4, 2019
under Uncategorized
∞ Permalink 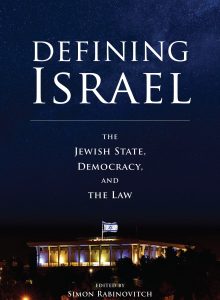 “Since the early 2000s, some elements in Israeli politics and society have pushed for Israel’s “Jewishness” to have a more substantive role in the life of the state. (Indeed, some right wing candidates in recent Knesset elections have stood on a platform of reining in the “liberal activism” of Israel’s judges, even though the approach of the court has changed significantly since Barak’s day). Others have resisted this trend. As a result, Israeli legislators, intellectuals and NGOs have produced a ream of constitutional proposals, position papers and vision statements, which set out diverse positions on the relationship between Israel, Judaism, and between its citizens of different ethnicities and religions. Defining Israel is the story of this complex debate and its wide-ranging consequences. An extensive introduction by the editor, Simon Rabinovitch, offers a fine overview of the history of the Nation-State law from various angles. It deals in detail with the role of Israel’s tangled partisan politics in the production of the law. It also situates the law in Israel’s longer-term civic debates. Crucially, it includes a section comparing constitutional developments in Israel with those in other countries, including Eastern Europe and various Islamic countries, in which ethnicity and religion pose analogous, though obviously not identical, challenges to questions of civic identity. The bulk of the book comprises a diverse series of fifteen reflections on the law. The contributions are primarily from Israeli scholars, politicians and public figures, with the addition of some American voices.”