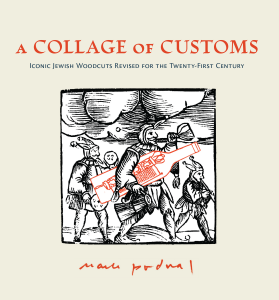 In A Collage of Customs, Mark Podwal’s imaginative and inventive interpretations of woodcuts from a 16th-century Sefer Minhagim (Book of Customs) allow readers of this volume to see these historic images in a new light. Podwal brings humor and whimsy to religious objects and practices, while at the same time delivering profound and nuanced commentary on Jewish customs and history, both through his art, and through his insightful accompanying text.

The book appears in concert with an exhibition of Podwal’s renderings at the Cincinnati Skirball Museum.

What a treasure and a treat the eminent artist and author Mark Podwal has given us. In his unique way, Podwal has combined visual beauty and clever humor to provide us with illuminating details about lesser-known Jewish customs alongside magnificent woodcut illustrations. I learned much from this fascinating book and thoroughly enjoyed the learning! A book for both bedside reading and living room display, A Collage of Customs is a wonderful gift for oneself and for others.
– Marcia Falk

Ritual is the inescapable language of religion. Mark Podwal’s 26 chapters of A Collage of Customs, equivalent to the numerical value of the four Hebrew letters of God’s most sacred name, is an ingenious creation designed to bring us a bit closer to God through the ever-evolving rich language of Jewish ritual. Alighting on the popular model of medieval books of customs, Podwal crafted his own intricate narrative of word and woodcut that skillfully oscillates between past and present, law and levity, gravitas and celebration. Truly a unique gem.
– Ismar Schorsch

Mark Podwal, the foremost contemporary illustrator and resuscitator of Judaic historical texts, myths and stories, has taken new liberties with past rites in his latest book, A Collage of Customs: Iconic Jewish Woodcuts Revised for the Twenty-First Century, where he engages in subtle comic interpretations of images from a 16th-century Sefer Minhagim (Book of Customs). These Minhagim were among the most popular Jewish books in Europe throughout the 18th century. In concise and easily understandable language, the text explained how to observe rituals and customs in the proper fashion… I call Podwal the Max Ernst of Judaic vintage visual narrative. Podwal…injects his work with surrealist aesthetic and coy bite by reimagining vintage illumination. This feat is done in somewhat the same way that Ernst conjured in his infamous “collage novels,” including Une Semaine de Bonté, where he surgically manipulated and transformed gloomy Victorian engravings into absurdist graphic tableau. While Ernst leaned toward eroticism and mystery, Podwal brings humor and whimsy to religious rituals, objects and practices. At the same time, in this book he delivers nuanced commentary on Jewish customs and history, both with his art and the accompanying contemporary text.
– Print Magazine

Mark Podwal has written and illustrated more than a dozen books, and has illustrated more than two dozen works by such authors as Elie Wiesel, Heinrich Heine, Harold Bloom, and Francine Prose. His art is represented in the collections of the Metropolitan Museum of Art, the Victoria and Albert Museum, Prague’s National Gallery, the Bodleian Library, and Jewish museums in Berlin, Vienna, Prague, and New York, among other venues. Honors he has received include being named Officer of the Order of Arts and Letters by the French Ministry of Culture; the Jewish Cultural Achievement Award from the Foundation for Jewish Culture, and the Gratias Agit Prize from the Czech Ministry of Foreign Affairs.