x
by CORY BURNS
on August 1, 2022
under Forthcoming, News
∞ Permalink 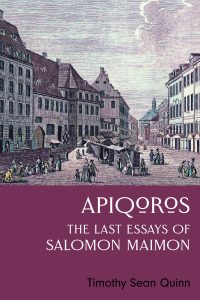 Kant considered him the greatest critic of his work.  Fichte thought him the most impressive mind of their generation. Yet Salomon Maimon (1753-1800) has fallen into relative obscurity.  This volume is an attempt to draw attention to essays composed during the final years of his life.  These essays are of particular interest:  they show that even though Maimon was a self-proclaimed apiqoros grappling with the implications of Kantian philosophy, his thinking remained deeply influenced by his Jewish intellectual inheritance, especially Maimonides. The book is divided into two parts.  The first part contains a general account of Maimon’s intellectual biography, along with commentary on his final essays.  The second part contains translations of those essays, the principal themes of which concern moral psychology. The reader is therefore able to see the degree to which Maimon, at the end of his life, became skeptical of his effort to unite Kant and Maimonides.  The book concludes with an appendix containing a translation of an account of Maimon’s final hours penned by one of his friends.

“This volume makes available in English for the first time the last essays of the extraordinary philosopher, Salomon Maimon (1753-1800), one of Kant’s most important interlocutors, and the founder of post-Kantian Jewish philosophy.  In this valuable collection, we see Maimon reflecting with his well-known acuity on the nature and grounds of morality, in conversation with Kant and, as always, with Maimonides, even when he stands in the shadows.  Timothy Sean Quinn has made an important contribution, and this volume will be essential reading for anyone who is interested in ethics, especially but not only Kantian ethics, and in Jewish philosophy.”

“Timothy Quinn’s commentary on and translations of Salomon Maimon’s last essays will finally allow English readers to think themselves into Maimon’s system of moral thought. J.G. Fichte once remarked that Maimon’s early philosophical writings had “completely overturned the entire Kantian philosophy.” “Apiqoros”: The Last Essays of Salomon Maimon brilliantly illustrates that Maimon never ceased in his struggle with Kant’s thought. Readers will be thankful for Quinn’s insightful commentary, which provides reliable summaries of the main themes and arguments of Maimon’s essays, while offering the necessary philosophical context for appreciating the importance of Maimon’s work.  “Apiqoros”: The Last Essays of Salomon Maimon is simply an extraordinary volume.”

“Arguably, Salomon Maimon was the greatest Jewish philosopher after Spinoza. Maimon was not, however, a good politician, and frequently he would say out loud what many of his contemporaries would barely dare to think. At the very end of his life, he wrote several important essays reflecting on his experience in the German philosophical world, and the result is typically both penetrating and bold. This fascinating collection of Maimon’s last essays is another testimony for the originality of a genius who dared to philosophize without commitments to the fairytales, commonsense, and good taste conventions of current society. Is there anything more dangerous than a sharp homeless philosopher?”