A Chosen Calling: Jews in Science in the Twentieth Century, originally 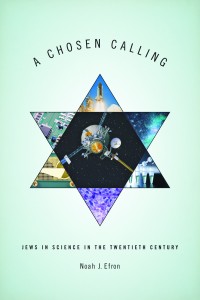 Rejecting the idea that Jews have done well in science because of uniquely Jewish traits, Jewish brains, and Jewish habits of mind, historian of science Noah J. Efron approaches the Jewish affinity for science through the geographic and cultural circumstances of Jews who were compelled to settle in the United States, Palestine, and the Soviet Union in the early twentieth century. Efron illustrates how science was central to their dreams of creating new worlds—welcoming worlds—for a persecuted people.

The Johns Hopkins University Press is pleased to offer a 30% discount on this new title. We invite you to download the order form below for information about ordering by mail or phone, or click here and use the discount code HNAF at checkout.