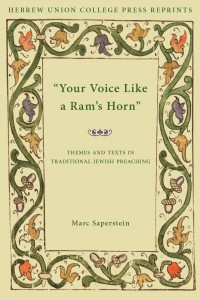 Monographs of the Hebrew Union College 18

The eighteen studies in this book continue the exploration of the Jewish sermon Saperstein began in his groundbreaking Jewish Preaching 1200-1800. His new research further illustrates the importance of this genre, largely ignored by modern scholarship, as an indispensible resource for understanding Jewish history, spirituality, and thought from the High Middle Ages to the beginning of the Emancipation in Europe.

Saperstein’s thematic studies explore the most important occasions for traditional rabbinic preaching: the Days of Awe and the Passover season. Two studies focus on the homiletical exegesis of classical Jewish texts, and two deal with the historical interaction of Christians and Jews. Saperstein discusses the diffusion of philosophical ideas through homiletics and identifies central conceptual issues presented in the Italian Jewish pulpit. Other essays include a critical analysis of the work of Saul Levi Morteira of Amsterdam, an examination of sermons in eighteenth-century Prague for indications of a traditional community in crisis, and homiletical evidence for a developing sense of patriotic identification with the state, even before Emancipation changed the legal status of the Jews.

Saperstein also presents newly discovered sermonic texts in order to explore a full panoply of issues relating to historical context and genre. All are published for the first time with his annotated translation accompanying the Hebrew original. Included are a Guide for Preachers, sermons on repentance and on the Binding of Isaac, and three eulogies, the last a fascinating memorialization of the antisemitic empress Maria Theresa.

Marc Saperstein is Gloria M. Goldstein Professor of Jewish History and Thought and Director of the program in Jewish and Near Eastern Studies at Washington University in St. Louis. He previously served for nine years on the faculty at Harvard, holding the first regular position in Jewish Studies at Harvard Divinity School. He is the author of Decoding the Rabbis and Moments of Crisis in Jewish-Christian Relations and the editor of Essential Papers on Messianic Movements and Personalities in Jewish History.