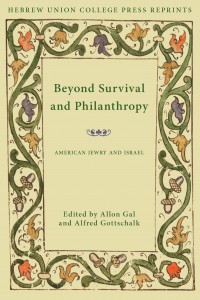 What will hold American Jewry and Israel together as the traditional “crisis glue” melts down and the familiar and practiced Israeli call for aid retreats to the remote background of each community’s existence? This is the question addressed by participants in a 1996 conference sponsored by the Center for North American Jewry of Ben-Gurion University of the Negev and Hebrew Union College-Jewish Institute of Religion.

Beyond Survival and Philanthropy is a collection of answers to this complex question offered by thirty-one leading Israeli and American scholars, educators, journalists, and communal leaders. They consider the cultural currents that have shifted American Jewish attitudes toward Israel from a mobilization model to a search-for-personal-meaning model and trace the historical roots of present tensions between religious and secular Jews in Israel. The views of Yehezkel Kaufmann, Ahad Ha-Am, and David Ben-Gurion are used to help differentiate between the state of exile, the sense of exile, and the recognition of exile. The place of Israel in American Jewish education and the treatment of American Jewry in Israeli schools is considered, and the backstory of recent efforts to streamline the institutional complex that raises funds for Israel and local needs in American Jewish communities is explored. Speaker of the Knesset Avraham Berg presents his view of how the changing natures of both Zionism and Judaism will affect all Jews in the twenty-first century.

Sometimes agreeing, sometimes disagreeing, but always expanding upon these presentations, authors of the response essays in the volume reflect and underscore the values that precipitated this discussion: recognition of the unity of the Jewish people and of the continuing to share diverse views and opinions in order to formulate and address the crucial and sometimes radical choices that confront American Jewry and Israel.

Allon Gal is Professor Emeritus in the Department of History at Ben-Gurion University of the Negev. Alfred Gottschalk (1930-2009) was Distinguished Professor of Bible and Jewish Thought, the John and Marianne Slade Professor of Jewish Intellectual History, and Chancellor Emeritus at HUC-JIR. He was President of HUC-JIR from 1971 to 1995.